Downtown Corpus Christi is a special place. Widely considered the â€œfirst neighborhoodâ€ at the heart of the city, it is rich with a dynamic history. Youâ€™ll never want for something exciting, with so many ways to have fun. The greater downtown area is overflowing with new and lively energy. Between the funky, eclectic attitude of the Marina Arts District to the sands of North Beach, the bustling business center that is Uptown to the always moving Waterâ€™s Edge District and from the liveliest SEA District to the city blocks buzzing with the professionals of the Medical District, downtown is always changing and moving forward. And as downtown evolves, one thing will always remain trueâ€”it is in all ways, an original. 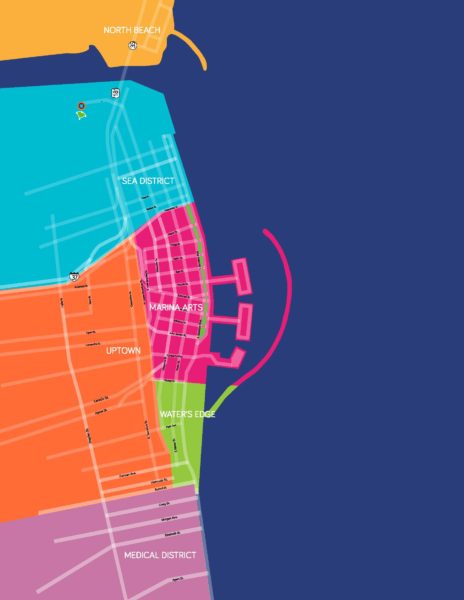 Just a hop, skip and a step across the Harbor Bridge youâ€™ll find a hidden little gem called North Beach. An urban oasis of sand, salt and sun, North Beach is home two of Texasâ€™ top tourist attractions, The USS Lexington and Texas State Aquarium. These places make great anchors to the most northern tip of greater downtown. With some scrumptious eats at Blackbeardâ€™s or Fajitaville, live music at Pier 99 and so much more, North Beach is a perfect little escape for city dwellers wanting a quick beach fix without having to drive to the island.

Your first stop back over the Harbor Bridge is the SEA District. This lively district derives its name from the abundance of Sports, Entertainment and Arts you can find here. It is where you can catch a Hooks game at Whataburger Field, see live theater at Harbor Playhouse, catch the ballet, shows, or sporting events at Selena Auditorium and American Bank Center, concerts at Brewster Street or Concrete Street, take in some Friday night fireworks or splash around in a waterpark. If youâ€™re in the mood to expand your horizons, stop by one of the many museums in this district or Heritage Park. Perched under the dramatic expanses of the Harbor Bridge, SEA is located at the southern edge of the Corpus Christi Ship Channel so at any given moment you can spot massive ships moving world trade in and out of 5th largest seaport in the nation. From I-37 to the Ship Channel, this district is bursting at the seams with energy.

In the heart of Downtown Corpus Christi, bordered by I-37, Kinney, Lower Broadway and the marina, we have our wonderful Marina Arts District. This district is where you go to get original. Craving seafood? Pizza? A fun gastro pub? Maybe some food trucks? Marina Arts has you covered with some of Corpusâ€™ best original cuisine. This arts district is also known for its incredible displays of local art. Home of First Friday ArtWalk and our amazing downtown businesses that host a variety of local artists and vendors, there is always something to discover! Some of best places in Corpus Christi to find original music and festivals are also located in Marina Arts District. Whether itâ€™s a local brew, a craft cocktail, locally grown produce, or one of a kind pieces, this is where to find the craft of our local artists and artisans. Walk-able neighborhoods, endless entertainment options and one-of-a-kind restaurants where food is an art form and venues await you. Marina Arts District offers an urban coastal lifestyle that is uniquely Corpus Christi.

Just up the hill from Marina Arts District, youâ€™ll find Uptown. Uptown is where people get down to business. Home to many of the cityâ€™s high rises and financial centers, Uptown offers an array of office space options and is quickly becoming a hot spot for new restaurants and residential development. And on the edge of Uptown youâ€™ll find the cityâ€™s government and municipal area. City Hall, County Courthouse, Regional Transportation Authority, and the Corpus Christi Independent School District all call this district home. This is the area that keeps the city moving forward.

With wonderful parks and McGee Beach, Waterâ€™s Edge District is a quiet sanctuary tucked up against the shoreline, where Corpus Christi comes to play. Its boundaries consist of Kinney Street to Buford and Chaparral Street to the water. Major festivals, weekend BBQs, cycling, skateboarding are just some of the things youâ€™ll see people enjoying along the seawall. This is where you get active and get outdoors. From a newly covered basketball court to arguably the best dog park in Corpus, Waterâ€™s Edge is the place to get out and experience downtown in an active way.

On the south end of downtown youâ€™ll find several city-blocks that are buzzing with doctors and medical professionals. Our Medical District is home to the regionâ€™s largest hospital and only Level II Trauma Center south of San Antonio. As the medical industry continues to expand so do the services and businesses that cater to the influx of activity in the area. A cluster of hospital high rises and doctorsâ€™ offices tucked into one medical mecca, the Medical District is the way we all get well soon.