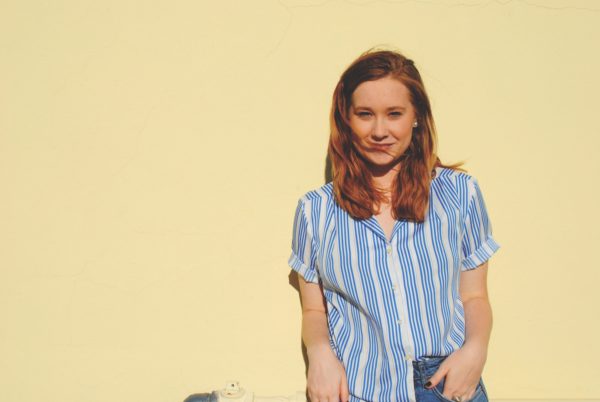 Kylie Kinnett Cooper is the kind of woman I wish I had known in high school. And that I’m thankful for knowing now. Her naturally warm and positive energy is coming off her in waves when I meet her at Corpus’ hottest new coffee spot in downtown, Lucy’s Snack Bar. I’ve known Kylie casually, through mutual friends for a little bit but was never able to sit down and I was so excited.

Kylie, the 24-year-old Corpus Christi native, is the Managing Editor at The Bend Magazine. You know The Bend. It’s the wonderfully beautiful magazine you see around town and probably (if not you totally should) follow on social media. I assume you know The Bend to some extent because this year they sold out their Brunch on the Bay event in record time and had over 100,000 Local’s List votes, across around 25,000 people, a full 3 days before the voting closed.

A lot of what has propelled The Bend into people’s homes and cell phones in the last few years is thanks to Cooper and her amazing team members. But she wasn’t always sure she wanted to work at a place like The Bend or even in the industry.

When Cooper started college at Texas A&M University, she assumed that her major in Media Studies and minor in Traditional Art would take her into something involving Public Relations. Though she was always an avid reader, writer, and lover of magazines (especially Vogue), she never expected it to take her along this path.

After working as an intern at Insite Magazine, a lifestyle magazine in Bryan, Texas her sophomore year at A&M, she began to see a future in the industry. However, it was her experience running The Rec Magazine her senior year that made her the perfect fit for The Bend.

She knew that she wanted to work for a magazine in Texas but, as most of us can attest to, never expected to end up back in Corpus Christi. In the process of submitting her resume to magazines and publications in places like Houston, Austin, and San Antonio, she also sent it to The Bend in hope of doing some freelance writing after she graduated. Thankfully, Jordan Regas, owner of the magazine, responded saying they weren’t hiring for a freelance writer but instead wanted to interview her for the Managing Editor positions. And the rest is how we say, history.

Kylie, who is celebrating her two-year anniversary at the magazine in May, is the kind of person you want running a magazine that showcases the best of this community. She clearly sees the changing landscape of Corpus Christi and has continuous faith in everyone who is coming together to bring this city to its potential.

One of her favorite parts about working in the job that has made all of this possible? Besides being in the physical and cultural epicenter of change in the city? Telling the stories of all the hard-working people and bringing their passions and good to the forefront of the community.

“You write these stories [about citizens of The Coastal Bend] because of their passions”, Kylie states when speaking about her ability to write content for the magazine, “[You’re] having real conversations with almost basic strangers and making connections with these people.” The vulnerability and passion that lights up their eyes when telling their stories are the reasons she is honored with sharing these stories with the world.

Her passion is also evident when she talks about the future she and her team see for the magazine and themselves. They have a “never be satisfied with good enough” mindset about everything they do at the publication. While constantly growing and evolving, they often think “Is this something we would be proud to have in our magazine? Put our names on? Is it something we are proud to give to the community?” and the answer is almost always yes. According to Kylie, everyone at the magazine shares the same morals and values about the city and see their part in the future of the Coastal Bend.

As someone to has left and come back to Corpus quite a few times, I understand the sentiment put forth by Kylie that it “feels different coming back and experiencing it as an adult.” Without coming back here after college, she never would have met her husband, Hybrid Records’ owner Carlos Cooper. The two were married earlier this year and boast two pets, dog Dilly and cat Dwight, as their current children. Although she says that she can see herself raising a family here.

The Coastal Bend becomes a different place once you’ve grown up and found a career and community that is just as passionate as you are. She is proud of having grown up here and is grateful to this city and how it shaped her into the woman she is today. It is a place that Mrs. Cooper roots for and doesn’t plan on leaving anytime soon.

When Kylie isn’t running the editorial half of the magazine she lovingly calls her “baby”, you can find her with her “badass group of friends”. She is constantly inspired by the people in her life and truly draws her energy from her friends and loved ones. Alex Chapa, of Corpus’ favorite (and mine) local handmade ceramics business Moonstone’d Pottery, is lucky to count herself as a member of Kylie’s circle. “She is passionate about everything she partakes in, she is a confident leader with relentless determination,” Chapa stated when asked about her friend, “and [Kylie’s] motivation to better our city to make her shine to her fullest is admiring.”

Even Kylie herself knows what a positive and caring person she is. She says, “I’m inherently an optimist, always looking for the silver linings”, and it’s apparent when speaking with her. Her face lights up when she talks about her two role models, her mother and Ana Wintour. “Two badass women”. Having these two strong female figures to look up to, one who runs not only Vogue (Kylie’s “bible”) but also an entire publishing house and the other who was a single mother to Kylie and her sister, has taught her to push through adversity and be a strong and independent woman.

Other than these two strong women, Kylie also thanks her husband for teaching her that “it’s okay for something to be wrong or for something to suck,” which was a hard lesson for someone so empathetic.  She isn’t kind or empathetic in a cliche, lights and rainbows sort of way. Kylie is the kind of person who genuinely “always wants people to be the best versions of themselves and feel good about themselves.”

While Carlos, the practical, logical love of her life, has helped show her that experiencing every emotion, even the bad ones, is okay, she still believes her judgment and decision making are most often based on emotion. She can embrace the bad, not try to fix everything and still put her all into everything she does. Kylie’s belief is that as long as something feels good and right in her soul, then she can be proud of it. And if it’s something she’s proud of and passionate about, she knows that it will connect with the right people.

So next time you see the “truly brightest light in this world with a heart of gold”, as Ms. Chapa so affectionately refers to her, around town, know that she is one of the millennials dedicated to making this city a better place. Whether it’s in her role as Managing Editor of The Bend or casually reading a book of poetry or short stories at the newest coffee shop, Kylie’s light will be shining around Corpus Christi for years to come.